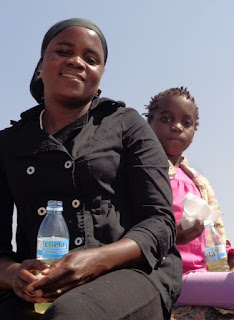 
I met Florinda for the first time at a Bible Society translation workshop in Maputo Mozambique in 2011. A very alive, vivacious, confident, happy person, with almost something of a challenging look in her face. Life was good. And an excellent translator according to reports. In the Nkumbi language, southern Angola. At this workshop in Lubango she was there again. But dressed in black. And her little 8-year old daughter with her. The first day I thought nothing of it. The second day there was that black dress again. This is an old Portuguese custom for a woman to dress in black when there has been a death in her family. (Actually quite a beautiful custom. This way everyone in the community knows she is in mourning and they then treat her accordingly, with care and respect. Not always but sometimes a bus driver will just waive the local bus tarif, or a kind shopkeeper will fill up the tin of rice to overflowing instead of just three quarters full. Little gestures to make life easier for her.) So I wanted to find out more, and here is the amazing story I learned.

About a year ago Florinda was expecting her third child. The child was born, but then unexpectedly the two-month old little girl died. Around July. Father and mother were distraught. But she bravely continued translating the Scriptures in Nkumbi and her husband his work. But then disaster struck again: her husband was killed in a motorbike accident close to their little house only four months after the loss of their baby. Two strokes in a row.

As if this was not enough, now her family is turning against her. There must be something wrong with her if two disasters in a row hit her in this way. Maybe she has been cursed by someone, or she has committed some taboo that provoked the ire of God or the ancestors. Imagine this: the loss of two loved ones and then your extended family starts wondering if everything is ok with you. The story of Job and his friends all over again. The problem is, in Africa family is everything. Who does she have to turn to? How would she handle this?

But this is not the end of the story. With a calm voice and peaceful look on her face she explained that the work of translating the Bible for her own people has given her such a sense of peace and comfort in the midst of all this tragedy and rejection. Getting up in the morning with new courage has been possible. There is work to be done. My people needs God’s Word, she said, and desperately so. Even my church-going family needs it, and desperately so. And there she was, at the workshop, with her little girl in the classroom because the loss was still to much for the girl to be separated from her mother for those two weeks. What a testimony of the inspiration and comfort Bible translation is to her, in the midst of tragedy! However, she did ask for prayer, prayer as she needs to be strong and win her family over again, reassuring them that all of this is not HER fault. Will you and your family maybe pray for her as well? We are called to carry one another’s burdens. One way to do so is by praying. The prayer of the righteous is effective, we are promised by the apostle James…