Christian transformation of communities in Asia

SE Asia Today
More recently, a ministry we are connected with that serves in SE Asia has seen similar results.[5] In 2005, Tai Ping village was a typical poor rural community: everyone was hungry most of the time, the houses had dirt floors and mud walls. There were no latrines. People rarely washed. Few children went to school. The people were sick, hungry, and illiterate. Most importantly, they suffered from spiritual poverty. They had a saving faith in Christ, but no knowledge of a divine plan for their lives.
Through a simple training program the people learned that Jesus died not only so they could go to heaven, but also to reconcile and restore all things (Colossians 1:19-20; Revelation 21:5). They learned that God’s plan is for them to grow mentally, physically, spiritually, and socially (Luke 2:52), that God had given them resources and abilities He wanted them to use to show His love to others. They began to help those in need with food or simple gifts. 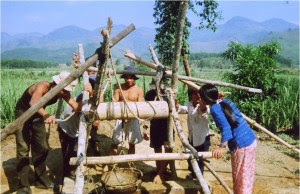 They plowed and harvested fields for the sick. They built houses for widows and orphans. They built roads to their farming areas. Farmers could grow enough rice to feed their families and to sell. Their income increased 5 to 10 times. Eventually they even built a bridge. The government was so impressed they invited the local TV station to film a news story on the church.
Eventually, the government built a school for the community as a reward for all their hard work. Now, all their children attend through high school, and for the first time ever, a number of children are attending university.
The church learned that God gave them their bodies, thus physical health mattered to God. They learned hygiene and the treatment for common illnesses. The community’s health began to transform. Neighbors saw the health of the church members improve and began to do imitate their practices. Soon, everyone in the community was using a latrine, washing before eating and cleaning their homes. Every household began gardening and eating vegetables. Today people are rarely sick. Children no longer die from diarrhea.
They learned what Scripture says about the roles of husbands and wives. They stopped beating their wives and began to show them love. Wives learn to treat their husbands with respect, and parents to show affection to their children.
People in the community became more receptive to the Gospel and the church itself was transformed. Now 90% of the community (about 700 people) profess faith in Christ, attend church, and tithe regularly. About 80% of church members actively participate in acts of service.
Similar stories could be told of many communities in the region. In fact, at least 50 communities have testified, “We no longer have poverty. We want to go to other villages and bring these truths to them.”
~
I believe change is coming. I have traveled the world, engaging with churches and Christian communities, for almost 40 years. As I meet with local church leaders they increasingly recognize that the influence of their gospel proclamation is not having the expected results on their people, communities and nations. They are hungry for answers and are finding them as they begin to emphasize obedience to Jesus teachings.
Maybe it’s time for a humble and prayerful global consideration of this issue!
Bob Moffit