On Sunday June 10th Hein van Wyk traveled with Danie Murray, Johannes Aucamp and José Ganhale from Namurua to Ile to do follow-up on a Hope for Africa Vision Conference conducted at the IRM Congregation there in 2010. Hope for Africa’s vision is to see engaged, high-impact local churches affecting real transformation in their communities and in sufficient mass to disciple their nations. The vision is realized through a mission of helping the local church discover a vision for the Kingdom, to adopt a biblical worldview and to live it out in every aspect of community life.

During the previous Conference in 2010, which was hosted by Past Antonio Ualize, Hein van Wyk, assisted by Danie Murray from Handevat and Johannes Aucamp from TOPIA, helped to lay a biblical worldview foundation for the church's role as God's private voluntary organisation. They examined the biblical evidence for man's brokenness and God's intentions for responding to that brokenness in the future as well as in the present. It further examined God's intentions for the role of the Church as it serves as a "window" through which broken humanity can see God's intentions for healing. During the conference the delegates had the opportunity to deal with cultural lies like fatalism, tribalism and male superiority in practical small group discussions.

The follow-up Conference this week was attended by delegates from various local churches in the area. These include the Igreja de Cristo, Evangelica de Cristo, Assemblies of God, Emmanuel Evangelical Church and IRM Ile.

As introduction to the Conference Hein shared the story of God’s covenant to Abraham from Romans 4: 17-24, “….Abraham, who is the father of us all, as it is written, "I have made you the father of many nations"—in the presence of the God in whom he believed, who gives life to the dead and calls into existence the things that do not exist. In hope he believed against hope, that he should become the father of many nations, as he had been told, "So shall your offspring be." He did not weaken in faith when he considered his own body, which was as good as dead (since he was about a hundred years old), or when he considered the barrenness of Sarah's womb. No unbelief made him waver concerning the promise of God, but he grew strong in his faith as he gave glory to God, fully convinced that God was able to do what he had promised. That is why his faith was "counted to him as righteousness." But the words "it was counted to him" were not written for his sake alone, but for ours also.”

God promised Abraham that all the nations of the earth would be blessed, including all the nations of Africa (Gen 12: 2-3). Abraham believed God, against all hope, and it was credited to him as righteousness.
It’s important to note that Abraham against all hope, faced the fact that he was old and that Sarah, his wife, was barren and past the age of child-bearing. Although at times Abraham searched for man-centered way to fulfill God’s Promise, he did not waver through unbelief; he became fully persuaded that God was able to do what He had promised. God will also credit righteousness to us (Africa) because of our faith. Let’s be greatly encouraged; transformation is coming as a result of the trustworthiness of His promise. Margaret Mead said, “Never doubt that a small group of thoughtful, committed citizens can change the world. Indeed, it’s the only thing that has ever happened.” 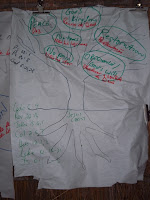 The Conference continued to build upon the two realities Abraham faced; God’s reality and man’s reality. The community of Ile is faced with a reality which they described as poverty, sickness, lack of clothing, clean water, transport, healthcare, etc.; basically a community who forgot God. But, there is another reality and it is the reality God has for Ile. In Jeremiah 29:11 we read, “For I know the plans I have for you, declares the LORD, plans for welfare and not for evil, to give you a future and a hope.” It’s upon this God-reality that the Vision Conference is build. There is hope for Ile, even against all hope.

Transformational development is more about roots that it is about fruits. Unless the root is changed, the fruit will remain the same. God knows this and provided a new Root for Ile in the Person of His Son, Jesus Christ. In Revelation 22:16 it says, "I, Jesus, have sent my angel to testify to you about these things for the churches. I am the root and the descendant of David, the bright morning star."On this Root the community must be build, as Paul said in Colossians 2:6,7 ,”Therefore, as you received Christ Jesus the Lord, so walk in him, rooted and built up in him and established in the faith, just as you were taught, abounding in thanksgiving.”

The old roots, which are not of God, are responsible for the current reality Ile is facing. These roots, in the form of cultural lies, were identified and discussed. These included beliefs like tribalism, male superiority, ancestral worship, work is a curse, that there is no future, materialism, etc. This was discussed in inter-active small group meetings. The delegates then had the opportunity to think of practical ways, based on the Word of God, they expose these lies.
Some of the feedback received during the course of the Conference was as follows:
Someone prayed during the meeting, “Our town (Ile) cries for change. Our glasses are misleading us.”

During one of the debriefing times Pastor Ualize shared with us how things are changing in Ile.
In December 2011 the town’s Administrator called all the churches together. She said that the condition of the community is going to get worse, because the Provincial government didn’t accept her plans for development. She asked the church leaders for advice and they said that the matter must be given to God.
In January 2012 a prayer meeting was held and all the community leaders were invited. They prayed, read the Bible and worshipped God for the entire day.
In June 2012 the Town council called the pastor saying that things have changed dramatically. As a result of the prayers plans are now underway to change the water situation in the town, to tar the main road going through the town, a community radio station will be started and a bank will open office in town. Not one of these things was possible in the past.

He also shared how his personal situation changed for the better. When the IRM started the congregation in Ile in 2007, many people had doubt about the sustainability of such an initiative. The previous pastor asked people to make bricks to build a building for the Church, but for many years the building didn’t become a reality. Only under the servant-leadership of Past Ualize did volunteers come and put up a steel structure which became the roof of the church building. More volunteers are now joining the process in making more bricks to complete the building.
Church members experienced positive change in both the community and in the congregation at Ile. They are now pulling more than their weight in sustainable development initiatives, like taking care of the up keep and transport needs of Pastor Ualize and his family. In 2006 Pastor Ualize had to travel by bicycle to visit the various prayer houses in the congregation; something that is tiring and very time consuming. In 2006 he was fortunate to receive a motorbike through a congregation in South Africa. It was a great help, but he still needed the finances to maintain it; something the local congregation was not prepared to help with. He had to find ways to fund his own transport by using whatever he had in his hands; including the continued use of the bicycle.
After four years of using a bicycle, the situation changed in December of 2010 when the elders started to give him money for transport. They gave him 2 liters of fuel for every prayer house he visited. Supporting the pastor financially was difficult for the small congregation, but they prevailed. Each month each prayer house committed itself to make a contribution; some even give extra. Now, when the pastor returns from visits to the prayer houses, his motorbike is loaded with many things people gave him. They came to understand that giving is more blessed than receiving.

Johannes facilitated the third and last day of the Conference with Danie interpreting for him. Johannes guided participants through the practical application of worldview principles, as were discussed during the previous two days. The practical application of Biblical Truth is done best through demonstrating God's love through acts of service. For this reason God call's the local expression of the Church to demonstrate His love in the community where it serves. Johannes explained to the participants the idea of Seed Actions or Seed Projects, which is a proven strategy or method for doing small, short-term development initiatives with local resources. The session helped participants to make use of resources found within the community and in the process be set free from dependency on outside resources.
The team left Ile late that afternoon heading for Mocuba, where they spent the night. Friday morning Hein, Johannes, Jose Ganhale and Tanya, a Peace Core worker from Mocuba, left for Milange. Danie stayed behind to receive a visiting team from South Africa..
The next round of Hope for Africa Vision Conferences in Mozambique organized by the IRM Tumbine Synod will take place from 17th to 27th of October 2012. Hein, Danie and Johannes will again be responsible for the facilitation of these Conferences.
Soli Deo Gloria!